Masking Up for Fun: the World's Top Carnivals

“Carnival” and “Mardi Gras” evoke some of the world’s most legendary, annual, pre-Easter parties. The two events are related, with a shared origin and even some of the same cultural traditions.
Carnival is a whole season, but Mardi Gras is one special day. They are celebrated in countries with strong, historic Catholic traditions.
The calendar tells all. Pre-Easter, devout Catholics observe Lent, a time of solemn prayer and self-denial. Lent begins on the Wednesday 40 days before Easter.
Mardi Gras means ‘Fat Tuesday.’ The Tuesday before Lent begins, people would use up all the sweets, treats, and rich foods in a last, big indulgence before putting the brakes on fun for Lent.
In many places, the idea of a big festival of indulgence before Lent lasts longer than a “Fat Tuesday.” That’s where “Carnival” comes in. The word “Carnival” comes from the Latin words meaning “to leave off meat.”
Now, “Carnival” is synonymous with an extended period of revelry, ending on Mardi Gras.
Beginning in Europe, the festivities spread to the New World, too, where they took on a festive life of their own. Now, two of the biggest pre-Lenten celebrations are in the Americas.
Which is next on your travel bucket list?

Venice is the showpiece of European Carnival celebrations, with three million visitors coming to Venice every year to take part. It lasts for about two weeks, ending in “Martedi Grasso,” (Fat Tuesday). The date of Easter changes every year, so Carnival’s dates do too.
The Carnival of Venice dates back over a thousand years, and its hallmark for centuries has been its fantastical masks.
From the 1300’s, between December 26th, the day after Christmas, until Fat Tuesday, Venetians were permitted to dress as they like, with rigid class rules for consumption suspended, and disguise themselves behind masks. The anonymity allowed upper and lower classes to mingle, as extravagant parties and balls were held throughout the wealthy trading city full of artisans who provided luxury products to high society.
Maskmakers had high status, traditionally creating leather, porcelain or famously, Venetian glass. The distinctive styles with different names, often for people of different occupations, are still used today, including masks with long, creepy beaks, cat-eye, half-masks held to the face with a baton, or white porcelain masks worn with a tricorn hat and cloak.
Masks are still central to the Carnival of Venice experience today. Visitors can buy masks at souvenir or high art prices year round throughout the city. Nowadays most Italian masks are made of lighter materials, often hand-painted with gold leaf and decorated with feathers and artificial or even real gems.
One of the central events in a modern Venice Carnival is the contest for most beautiful mask, as well as masked balls that put epic Italian style and hospitality on full display.

You can thank Louisiana’s French history for its modern-day reputation as having the most famous pre-Easter party in North America. Records show the first Fat Tuesday, or Mardi Gras, was celebrated on the continent in Louisiana in 1703, fostered by governors from France. In those early days, staples of modern-day Mardi Gras were established, including masked societies, elegant society balls, and processions.
Other traditions followed, including torches, or ‘flambeaux’ to light evening festivities with an air of romance, elaborate floats, Rex, the King of Carnival, and the establishment of purple, green and gold as the official colors of the local version of Carnival. In 1875, Mardi Gras was designated a legal holiday in Louisiana, and it remains one today.
New Orleans’ celebrations last much longer than that single Fat Tuesday. Here, they begin on the 12th day of Christmas, January 6th. That’s the Epiphany, the day the biblical three kings arrived to meet the infant Jesus. It’s the origin of NOLA’s Mardi Gras tradition of king cake, with a tiny figurine representing a baby, cooked inside for one lucky person to find in their slice.
Today’s Mardi Gras celebrations in New Orleans incorporate other uniquely local elements too, including of course jazz music, and strings of beads caught from passing parade floats. 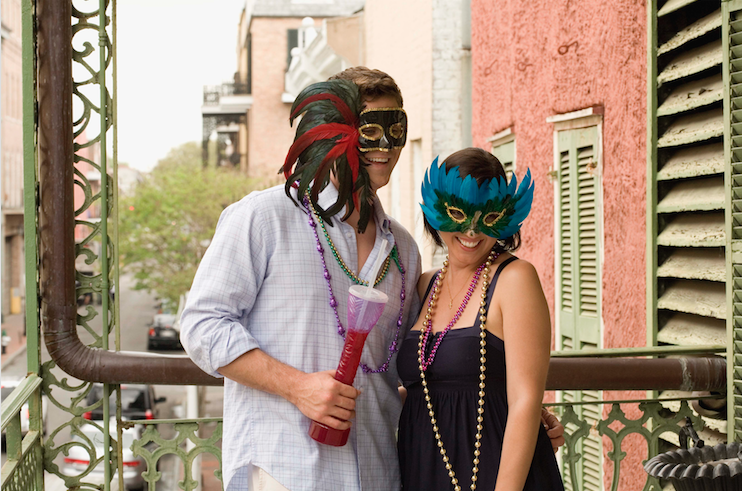 NOLA’s Mardi Gras is the largest masked party on the continent. Carrying on the Old World tradition of masks providing anonymity and equality between classes, they remain mandatory on parade floats, and practically universal among revellers on Mardi Gras itself.

The Carnival in Rio de Janeiro is the biggest in the world, with two million people daily celebrating in the streets of Brazil’s famous, beachside city.
Rio’s Carnival dates back hundreds of years, to Portuguese colonists in the 1600’s. By the 1800’s, celebrations incorporated masked balls. In the early 1900’s, Africans in Brazil transformed Carnival with the introduction of samba music – the beginning of the uniquely Brazilian version of Carnival we know today.
Rio’s Carnival begins on the Friday before the start of Lent and wraps up on Fat Tuesday. Today, about 200 samba ‘schools’ or neighborhood societies build extravagant themed floats and costumes for the parade in the ‘Sambadrome’ with grandstands and private boxes for excellent viewing. 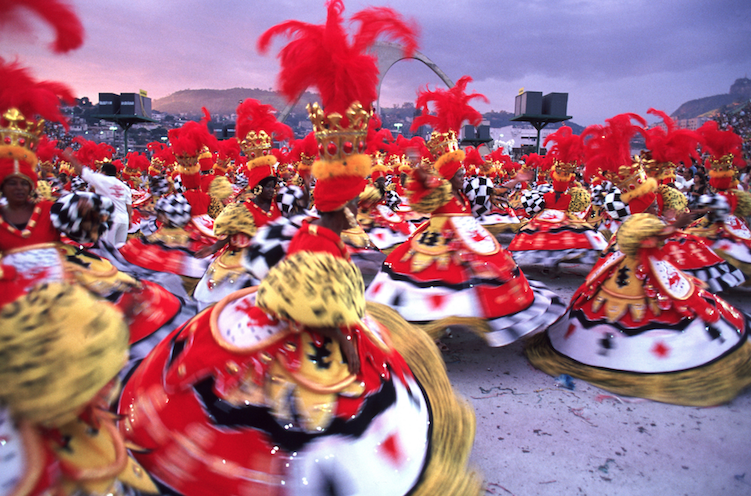 While the parade is taking place in the Sambadrome, the streets outside and throughout the city, as well as its most elegant ballrooms are alive with more party-goers. While the Sambadrome and the ballroom of the Copacabana hotel are ticketed, the street carnival –with hundreds of ‘bandas’ taking place any any point during Carnival, is open to everyone.

Viking Neptune, the river and ocean cruise line’s newest ocean ship, has been ceremonially named by her godmother, re... learn more

On the Night Train: How to Jump On Board One of European Travel’s Hottest Trends

Europe is banning short hopper flights in a battle against emissions. The move is sparking a rail revival – and parti... learn more

Did you Know? The Leaning Tower of Pisa is... 'Straightening Up!'

Will it soon be named the Perfectly Ordinary Tower of Pisa? Will the Tuscan city whose claim to fame is an off-kilter... learn more

Let Us Help You